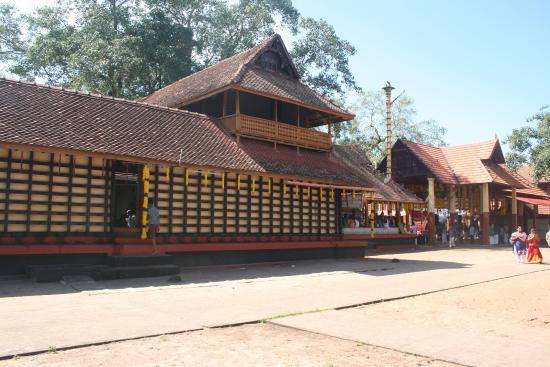 The temple is estimated as almost 500 years old. Plenty of stories are found allied to the origin of the temple. According to one story the idol of Mullakkal Devi” was brought here by a group of exiled soldiers from Thekkumkur territory. Primarily they placed the idol in a jasmine garden. Later a temple was constructed in the jasmine garden by the patronage of King Devanarayana of Chembagasery. There is another story popularly known related to the foundation of the temple. It is believed that during the conquest of Kerala by Tippu Sultan of Mysore, a group of Namboodiri Brahmins escaped from Malabar realm taking the auspicious idol of Mata Annapurneswari; the group spotted the Jasmine garden as the place to make the shrine and accordingly acted. Later on, the temple was established. Prior to 1961, the idol placed on the main shrine was of Mata Annapurneswari, who was seen ladle in one hand and pot on the other. As her temple was placed in a Jasmine Garden she was given the name Mullakkal Bhagawthy. The idol of Maa was found in the standing pose facing West digestion in the temple. In 1961 some incredible events took place. Believers have reported that a mentally unbalanced person entered the sanctum sanctorum and all on a sudden embraced the idol. Afterward, it was observed that some cracks had settled on the idol’s body. An astrologer predicted that the Goddess had instructed to create a fresh idol to be placed on the shrine instead of the old one. Accordingly, on 16 July 1962, a 4-feet tall Rajarajeswari idol was placed on the shrine replacing the old and damaged one. Later on, the idol of Lord Krishna and serpent gods were included and placed in different shrines.

Different festivals are celebrated in the Mullakkal Rajarajeswari Temple. The biggest festival celebrated here is Mullakkal Chirappu and it is celebrated for 41-day duration. The festival is commenced at beginning of the first of Malayalam Month Vrishchikam (Middle of November) and it ends on the eleventh of Malayalam month of Dhanu (December–January).The last 11 days of this festival are called Chirappu festival. The last two days of this Festival are counted as the most special and sacred one where nine elephants with colorful processions participate in the festive chore and thousands of devotees come to witness this auspicious occasion. Mullakkal Chirappu is celebrated in the temple with great grandeur and with best religious austerity. Besides regular puja, the best cultural programs, which are Kerala’s own heritage, are celebrated as an integral part of the celebration. However, apart from cultural programs also ‘Annadanam’ is a part of this spectacular event as the final day feast offers foods to at least 3000-4000 devotees. They invite famous musicians and artists to perform at the temple premises at night. The firework display on this day at the end of the festive ceremony is usually very elaborate and attractive to watch.

The first Sunday of December is celebrated as women’s festival. On this day all rituals and worships are done by women only. Ladies came from different areas and they lit lamps in the temple.

Navarathri festival is also celebrated with great grandeur in the Mullakkal Bhagawthy temple. On Maha Navami day at least 150-200 baby girls are given new clothes and they are worshipped as divine Kumaris. “Theyattu” is celebrated on that night. During this function, a huge portrait of the Goddess is made on the floor with different colored powder. Ace dancers dance on this color Rongolee and slowly this portrait gets removed from the floor. On Maha Navami Children place their text books on the main Shrine for Pooja; during this time special poojas are performed. “Bommai Kalu Festival” is an integral part of temple’s festive celebrations when all elderly women from Hindu society set there ‘Bommas’ on ‘Oottupura’; These women offer their sincere prayers by reading loudly Bhagavatham, the main holy scripture of Hindus and offer their prayers. “Thaipooyakavadi” is another significant festival celebrated in this temple once in a year. During this festival, about 15 Kavadisn take part in the parade and traditional dance session in a majestic manner.